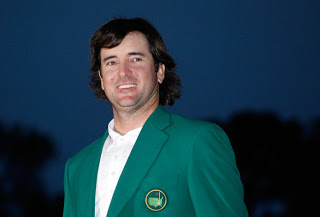 Even if you’ve never picked up a golf club in your life, it’s likely you’re familiar with the legendary golf tournament called “The Masters“. This is the home of the green jacket, the no-women members policy, the spectacular scenery along the course itself, the time-tested traditions of golf’s immortals, and now, 2012 Masters Champion, Gerry “Bubba” Watson.

At SquarePlanet we believe and loudly broadcast the power of contrast all the time. It’s the thing that sets you, your message or your product apart from everything else.
Well, ol’ boy Bubba just created some serious contrast in the golf world!!
His story sounds like it’s the stuff of Hollywood scriptwriters. For example, he owns the original “General Lee” from the Dukes of Hazard TV series. Seriously! He’s never taken a golf lesson. He plays with a bright pink driver and did I mention he’s in a music video wearing nothing but bib overall’s?
Oh, you have got see this…
Each one of these fun little factoids does not inherently develop contrast. The contrast occurs when Bubba’s position as a Masters Champion is compared to the rest of the more conservative golf community. Sure, the Professional Golfers Association and it’s players have been more and more interesting over the last few years, but all in all, Bubba is a true original.
As the keepers of contrast, SquarePlanet salutes Bubba Watson on an incredible victory.
Yee-Ha! (please insert your best “Dukes of Hazard” style Southern drawl here).