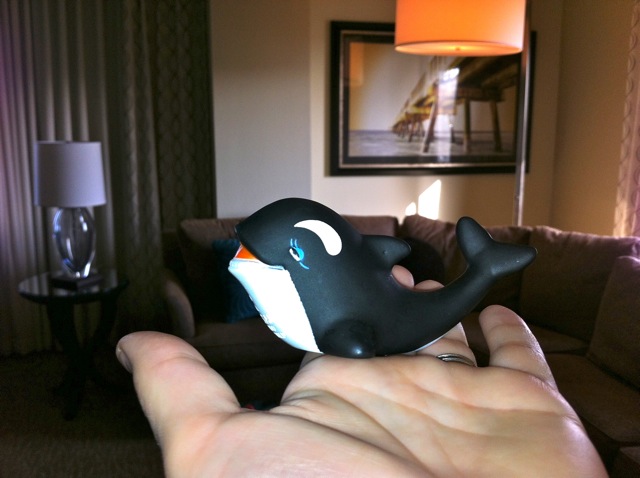 For this blog post, I’m going to ask you to please follow me down a long and twisted path for a moment, I promise it will lead to a real conclusion.  Okay, here goes…

In advance of a large event we’re producing this fall, the SquarePlanet team recently flew down to Orlando, Florida.  The express purpose of our trip was to thoroughly investigate the hotel ballrooms and function spaces where the event will be held.

Logically, we start the day at O’Hare International Airport.  One of the busiest, biggest airports in the country.  Thousands of people walking through, massive security lines, countless retail and food options abound.  Eventually we board a United Airlines A320, a large, sold-out plane carrying a couple hundred passengers.

The flight is your standard amalgam of khaki-wearing business people, excited families with overly-eager kids, employees clanking carts that carry assorted beverages while people watch iPads, play games on cell phones, read books or Kindles, watch movies overhead or simply sleep the hours away.  Add in the monotonous hum of engines, the ever-changing view out the window and the assorted announcements from the captain and you’ve got yourself a whole lot of stuff to internally process. 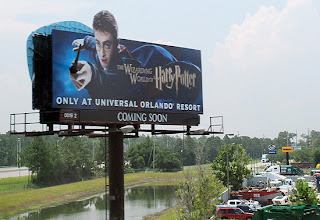 Finally in Orlando, we drive through central Florida’s billboard alley, where every billboard is more outrageous than the other.  From Disney to Universal, Goofy and Harry Potter to Ron Jon Surf Shop and the Kennedy Space Center.  It’s a feast for the eyes and unfortunately even more to distract the already sketchy drivers currently occupying the road.

As planned, we conduct our business, and after a few hours, we head out, driving another 10 minutes to Marriott’s Renaissance at Sea World.  We pass by a huge, land-based clearly fake Shamu that appears to be flying, a large swath of typically American retail (think T-shirts, hamburgers and other assorted sundries) and even a pack of turkey vultures who’ve decided to plop themselves in the street, forcing traffic to slow to a creep and proceed around them on the road’s shoulder.Once inside the twenty-story atrium, we get a pleasant tour of their space.  Along the way, above the centrally located bar, we see a huge HD display featuring videotaped shots of coral reefs, colorful schools of fish and even a shark or two.  The ballroom is bursting with activity as a large trade show is moving in.  Huge crates, booths in various states of near completion, beeping mechanical lifts hoisting men high into the air to hang large signs and people gingerly walking though the cluttered landscape. 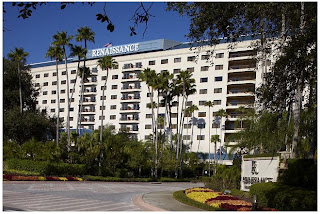 The activity throughout the entire hotel is palpable.  In fact, the entire trip thus far has been nothing less than sensory overload.  From sheer scale and color to motion and activity, our brains have been bombarded with impressions.

Finally, after much work, we check into our rooms.  From the elevator, we peel off one by one.  First it’s the 3rd floor.  Another on 6.  Me?  I hear the ‘ding-ding‘ on the seventh floor, signaling my departure.

After a long walk down a long, beige hallway, I get to my room which is at the very end; it’s a special corner suite.  I walk in and am immediately surprised by the vastness of my guest room…it’s huge!  Easily half the size of my actual home and way too large for one guy over one night.

The decor is new, modern and actually quite lovely.  A large, arc shaped sofa snakes around one corner of the room.   Fluffed with pillows, anchored by a large table and a big bucket of ice and water bottles, the sofa area is just plain ‘ol cool.

Mounted on the wall is a large flat screen television, right next to the spacious work center.  A large closet is dwarfed by a huge marble and chrome bathroom.  Two sinks, huge shower, enormous soaking tub, separate commode; basically, bathroom nirvana.  This is the kind of space where I’d like to party with friends; drinking Crystal and ‘making it rain’.  Of course, I’ve never done anything like that, so I’m not exactly sure what that means.

Just like the other parts of my day, all my senses are working in overdrive.  This should be just another hotel stay, one of the thousands I’ve done in 20 years of business travel.  But then…something happened.  I notice a little something on the rim of the bathtub.  Something small, but it caught my attention and made me stop, look and walk towards it for a closer inspection.

A broad smile quickly comes over me, as what I’m looking at is a little Shamu.  It’s a toy Shamu!  Think size and material like a rubber duck, yet here at Sea World, it’s now mini-orca-mascot Shamu.  I’m a grown man, but this silly little toy has instantly given me child-like joy.

In a day filled with a full feast for the senses, the one thing that really moved me?  A tiny toy whale.  The little Shamu was cleverly left there by the hotel; this is an intentional move.  And moreover, they WANT you to take him home, they practically dare you to take him home.  This is the stuff of genius folks.  Once he’s at your home, you’ll always fondly remember where he came from.  Brilliant!!

Literally millions and millions and millions of dollars are poured into the market to get us, the consumers, to notice and enjoy all of the amazing things that happen in Orlando and yet at the end of the day, I noticed a $.10 toy.I left little Shamu behind for the next guest, but now I know this with certainty, sometimes it’s the smallest things that makes the biggest impact.