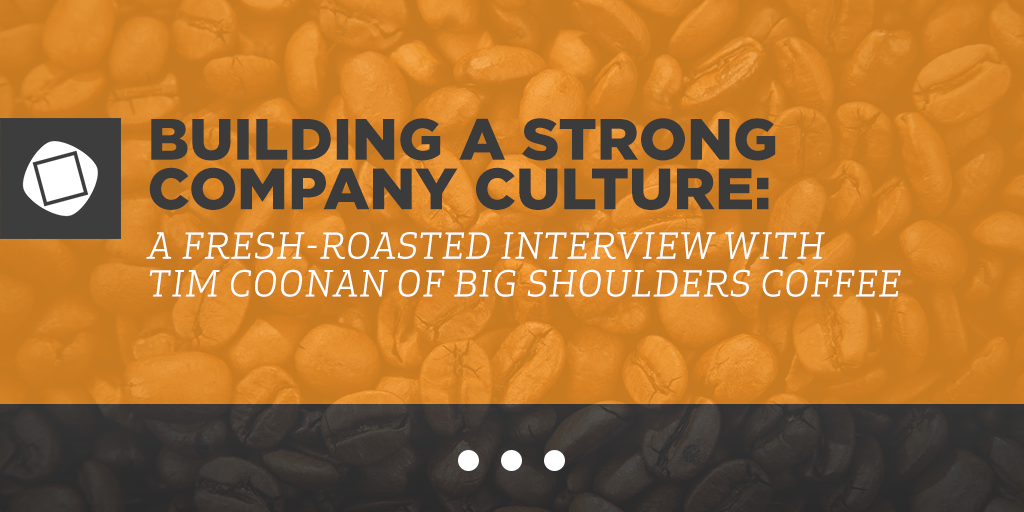 When Tim Coonan decided to shift his culinary focus in Chicago, his talent was not lost. With a career dating back to his roles as Sous Chef at Gordon, Chef-de-Cuisine at Spiaggia, and most recently as Chef Instructor at the Washburne Culinary Institute, Tim decided to embark on a life-long passion. Thus, Big Shoulders Coffee was born.

Long story short, they’re kicking ass. But not just because the coffee is amazing. Which it is. Tim has built a very strong and effective culture within Big Shoulders around a core set of beliefs. Which, to echo a drum that we’ve beat many times and will continue to beat, is something that we’re huge advocates of.

Understanding and proudly expressing what it is you and your brand stands for is the most critical step in building an impactful company culture. But rather than listen to us preach, we thought we’d dive straight into the mind of someone who’s doing this remarkably well.

Before answering our questions, though, Tim told us how he felt the “emperor is about to be exposed.”

“So first of all, the idea of me/Big Shoulders being successful from the perspective of leadership is a challenge. I perform brand and self-reflection daily if not hourly where I criticize my efforts and the connect or dis-connect between values, beliefs, impact of my leadership and how good we are at creating the type of culture that we aspire to. Being ever patient sometimes undercuts the ability for people to understand the performance driven results that we of course need as a small but growing business.”

What are the core beliefs that drive Big Shoulders and define your culture?

In no particular order:

How do you see it to that your employees are aligned with these beliefs? Are there prescribed punishments if someone’s being a douche and not sweeping the floor?

We’ve been super successful in finding and keeping people that “get it.”

If we’re in the business of making friends…which we are, we need to start out by identifying employees that are nice, that want to treat people the way they themselves want to be treated, aren’t too cool for school.

How do you go about the hiring process to make sure you’re finding the right cultural fits?

Our interview process is ridiculously long. We have never hired from the position of being short-staffed. There is something inherently wrong about going to an interview and having the interviewer ask with stress-filled eyes “can you start immediately?” It isn’t a healthy culture.

We strive to have the kind of work environment that employees want to genuinely spend time in.

As an employer you have to ask yourself the question, “Would I want to spend 8-hours a day here?” If you can’t answer that basic question with an affirmative yes, then it’s time to make some needed effort.

We are always in a “bench-building” mode in regards to staff. When we do conduct interviews we always do three. We don’t rush the process, we ask questions to best serve getting to know this person, not the usual line of questioning. Many times people have commented that my interviews are among the most unique they have ever had. We don’t even consider candidates that “need” a job. There has got to be something more than ourselves to do a job, putting our short-sighted, self-serving goals aside and serving others is the most important thing we can do.

Do you have a way of keeping yourself in check as the leader?

I don’t micro-manage. I’m nit-picky though. I believe in letting people make mistakes. It’s the only way that we learn.

[bctt tweet=”I believe the only way we learn is by making mistakes. – Tim Coonan of @BigShouldersCW” username=”squareplanet”]

I chirp in our employees’ ears all the time. Have on-the-spot counseling sessions. I believe you have to have the courage to take corrective action with the small things. I believe that as a leader it is my job to allow people to explore the boundaries but gently guide them back to the “middle” of what the expectations are when they get off track…as we all do from time to time.

I listen and observe. I do the things that impress my employees like clean the toilet, sweep the floor, pick up trash on the sidewalk, get on my knees and wipe the baseboards. The “chop wood, carry water” opportunities on the road to enlightenment are grounding and create the foundation for what we strive to do, and that’s be of service to others.

It also keeps me in check so I don’t get too big for my britches.

What would people be surprised to learn about the coffee industry?

In spite of its “chill” exterior…there are a lot of stress-filled days.

Finally, we have to ask – what’s your spirit animal?

Really? Ummm…I’d have to say is there such a thing as a mongoose merged with a butterfly…that’s a thing, right? Yeah, that’s me.

We did some research and such a thing does exist in the form of a girls bicycle—which somehow isn’t what we think you were going for—so we took the liberty of Photoshopping this creature into existence. Enjoy. 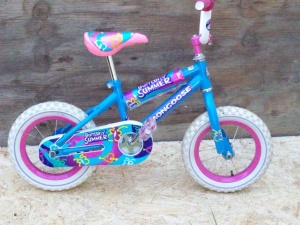 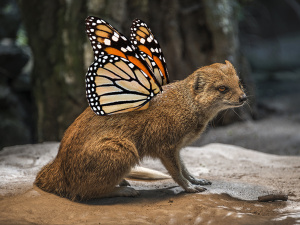 If you’re Chicago-based, stop by Big Shoulders. Don’t just take our word for it. From a Yelp Review:

“Big Shoulders Coffee is the epitome of coffee done right and it’s a place that makes me so glad (ecstatic, in fact) that coffee culture exists. They have high quality beans, a straightforward menu and the friendliest, most hard-working baristas who care as much about preparing the coffee as ensuring that you’re enjoying it. Wonderful.”