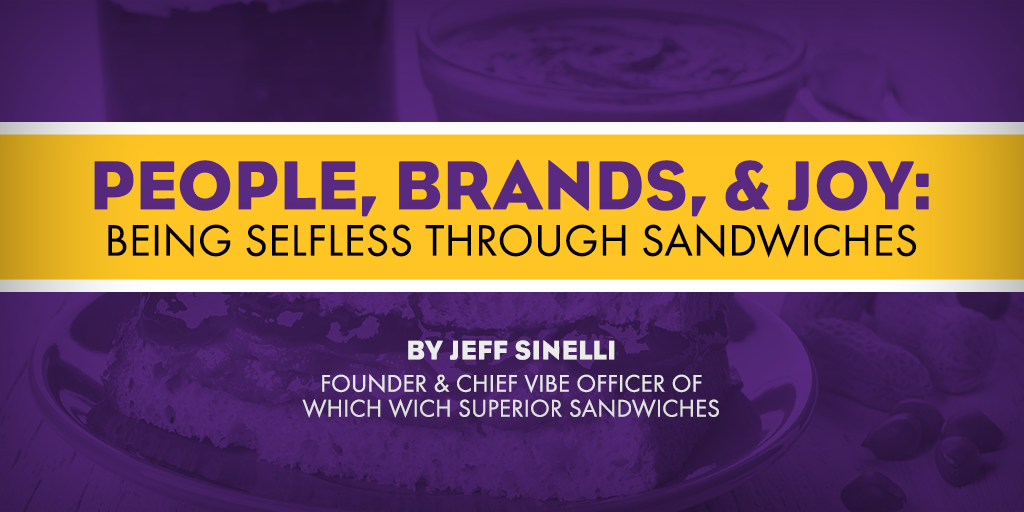 People, Brands, & Joy: Being Selfless in Business Through Sandwiches

We want to do BOTH.

It’s our mission: To make the world a better place through sandwiches. At Which Wich, this message isn’t something buried in the fine print of our website, or just token jargon surrounding our annual ‘Give Back’ day. It’s on every single Which Wich employee’s business cards. When we say we want to change the world, it’s because we actually do.

When my friends at SquarePlanet asked me to author a guest blog about the importance of being selfless in the business world, I jumped at the chance.

As Founder and Chief Vibe Officer of Which Wich Superior Sandwiches, I’ve always believed deeply that the power of sandwiches extends far beyond sustenance. I’m also a firm believer that building a lasting relationship between a customer and a brand means going far beyond the transactional exchange of product for price. That’s the selfish way out. It’s also why at Which Wich, we provide every possible opportunity for customers to determine not only how they want their food, but how they impact their Which Wich environment and the greater community around them.

This was how Project PB&J was born. Launched in 2014, Project PB&J is an initiative focused on bringing comfort and comfort food to those in the world who need it most: from those affected by natural disasters to homeless and poverty stricken populations living on the streets.

It’s very simple. For every one PB&J sandwich a customer purchases, we’ll give two. One is given immediately to the local community, and another gifted globally. The results and response to Project PB&J has been incredible. And that’s because it’s not about us. PB&J isn’t something we do on our own. It’s about our customers funding a cause that makes a real difference in people’s lives, one sandwich at a time.

And that’s just the donation model. The spreading parties have become a beast much more powerful than anyone could have expected.

In January of this year, we broke the Guinness Book of World Records’ mark for PB&J sandwiches made in one hour with a staggering 26,710 individual sandwiches. At spreading parties like these, and the one the SquarePlanet pirates helped us coordinate at the 2015 IGA Global Rally, in March have proven one thing if nothing else:

I believe that both people and businesses deep down don’t inherently want to be selfish. It can be an easy trap to fall into, however. I learned valuable lessons early on in my career about getting too caught up in what seems most important and risking losing the larger picture.

I grew up raised by parents and grandparents who were some of the most selfless people I’ve ever known. Even with barely anything, they always thought of others ahead of themselves. This sense of altruism is built into my DNA, so I’m proud to finally have a manifestation of that through my business.

People ask me all the time “Why not just donate money?”. While donations are obviously always welcome in the world of philanthropy, we don’t think it’s the most powerful way to make an impact. That’s why we encourage people to join us and Spread the Love at our spreading parties to lend your time and effort, rather than just your money.

And for anyone who’s participated in the delivery phase of Project PB&J, the most memorable moments with those on the receiving end of our efforts have made one thing very clear: It’s much bigger than a sandwich. It’s about the conversation. For those who don’t know where there next meal will come from or where they will sleep at night, sometimes a simple human interaction—a genuine gesture of empathy and acknowledgement—does as much if not more good than bread or a blanket ever can.

[bctt tweet=”Working towards a more selfless strategy as a business is no easy task. @JeffSinelli #SelflessBusiness”]

For me, every sandwich Project PB&J delivers and every life we touch is another reminder that Which Wich can’t be just about Which Wich. Building real relationships with people means extending the power of your product and your brand far past what may seem today to be most vital.

This philosophy of selflessness is not something I take lightly, and has become a huge part of the very foundation of the way Which Wich operates. Working towards a more selfless strategy as a business is no easy task. But, just like tackling hunger, it starts with a single step, one sandwich at a time.