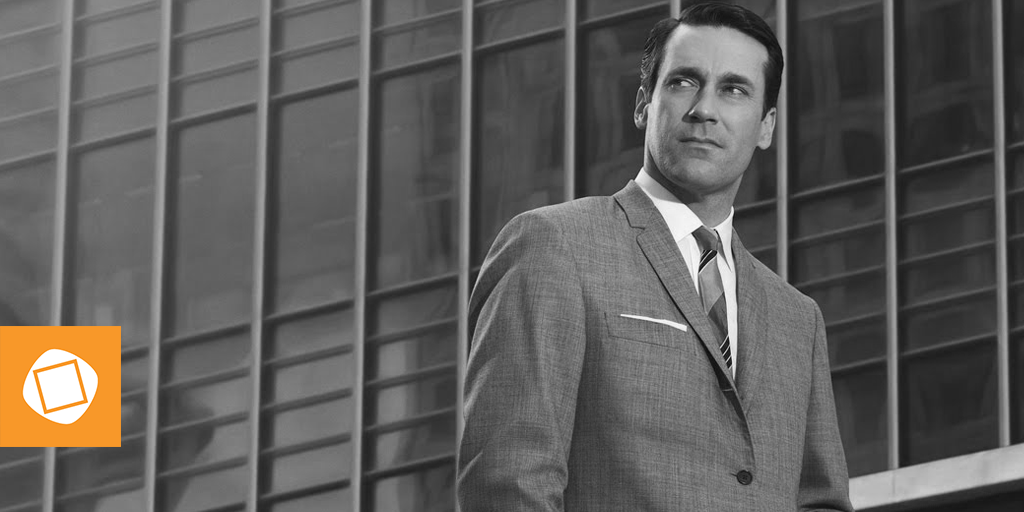 Stand Out in Business: Lessons from AMC’s Mad Men

Nine years ago on July 19, 2007, AMC debuted a new series that wasted no time garnering an infatuated audience: Mad Men. Centered around the “golden age” of advertising on Madison Avenue in New York in the late 1950’s – early 1970’s, it quickly gained a reputation for its promiscuity, complex characters and all-too-real look into how different American life was just decades ago.

But aside from its place as a source of riveting plot and entertainment, Mad Men and its star character Don Draper (played by Jon Hamm) can also offer audiences authentic and valuable lessons about communication, leadership and human nature that still ring true in today’s business environment.

To commemorate the 9th anniversary of the show’s debut, we thought we’d use a couple of our favorite Mad Men moments to show how some truths in business—in both fiction and nonfiction—never go out of style.

The Carousel: Lead with a story.

Marketers and communicators can get hung up focusing on the little details they think people care about—like the shape of a product or the technology it features. In this clip, Joe Harriman and Lynn Taylor of Kodak are convinced the main selling feature of their image projector is ‘the wheel’ and are set on being presented a campaign centered around it. Don takes the opportunity to teach the gentlemen at Kodak a thing or two about connecting with your audience through storytelling.

Our friend Don starts with a simple adage: “Technology is a glittery lure.”

He continues with a piece of advice from a former associate at Don’s first job, Teddy. The lesson: a new product can be great for satisfying a short-term itch, but an emotional connection creates a long-term bond with your brand.

It’s here that Don takes the gentlemen at Kodak on a visual journey through his own memories. One after another, he cycles through slides showcasing personal moments, explaining how nostalgia is a pain from an old wound. Their projector isn’t just a tool to view slides, it’s a time machine that takes us to a place where we ache to go again. It’s deeper than a memory, it’s a pain felt in your heart.

To drive the point home, Don selects the relatable moment of riding the carousel as a child to describe not just the physical movement of their product, but to solidify the emotional connection their customers will have to it.

So what does this mean in today’s tech-filled business environment? Stories will always matter. And whether you’re pitching a new product or building the very foundation of your brand, remember that the human imagination is only as powerful as it is tapped into.

Belle Jolie Lipstick: Work with those who believe what you believe.

People aren’t always onboard with what you have to say, and that’s ok. You don’t have to work with everybody, just the ones who believe what you believe. In this episode, Don comes head to head with a difficult client and chooses to teach him a lesson about beliefs.

At SquarePlanet, we talk a lot about beliefs and even have a few of our own. What it comes down to is that beliefs lead to thoughts, and thoughts lead to actions—what you believe ultimately influences your behavior. In business, what you believe – what you stand for, is an incredibly powerful way to bring those who agree closer to you, and to screen out those who don’t and shouldn’t work with you anyway.

In Don’s case, his belief is that the story behind their campaign is more important than the number of lipstick shades represented in it. His thoughts are that they shouldn’t work with someone who is, “a non-believer,” so he decides that they are no longer a good fit for his business.

We’re not saying that everyone needs to start firing their clients because they get a little difficult. What we are saying is that you can use beliefs to attract the right kind of customers. One example we use often is the relationship (or lack thereof) between Whole Foods and Oreo.

Oreo believes in a world of wonder. So they crafted a cookie that encourages you to explore different flavors, combinations and different ways to ensure you get the side with the frosting every time. They sell roughly 7.5 billion cookies per year.

Whole Foods believes in healthy eating and living. That’s why they sell organic, natural, vegan, and environmentally responsible products. As of today their stock is trading reasonably well at around $33/share.

The one thing you will never see is a pack of Oreos at Whole Foods. That’s because they don’t believe the same thing. Whole Foods could turn that $33/share into a whole lot more if they added an additional 7.5 million cookies to their inventory… but they’re just peachy with their decision not to. Why? Because you don’t have to work with everybody, just those that believe what you believe. By shouting what you believe, you’ll attract the clients that are right for your business.

Today, Don Draper (Dick Whitman) would be 91 years old. If he were a real person, and we were lucky enough to have him in our employ, he’d be our oldest team member. He’d also be disappointed with the lack of drinking and napping inside our Orange walls, probably making him quite cranky. Maybe it’s a good thing he lives in a television show.

[x_callout callout type=”left” title=”Chime In” message=”Are you communicating your message with stories? Shouting what you believe in? Working with everyone? Have a lesson from the show to share?” button_text=”Share Below in the Comments” button_icon=”commenting” href=”#comments”]