A $10 Blunder: What Miss Colorado and Jeb Bush Can Teach Us About Presentations

Disclaimer: this post is not a political endorsement of any sort, merely a candid observation of an avoidable presentation gaffe and a plug for someone near and dear to our hearts.

Back in June, U.S. Treasury Secretary Jacob J. Lew announced plans to redesign the $10 bill to feature a woman. The response was both widespread and largely very positive, with both politicians and the public weighing in on which notable American woman should be the first woman to appear on United States paper currency in over a century. Names like Susan B. Anthony, Rosa Parks, Harriet Tubman and Eleanor Roosevelt soon became front runners for the new portrait.

Okay, so fast forward three months to last Wednesday’s GOP Presidential Debate. A total of eleven candidates took the stage to battle it out and exchange their views about issues including immigration, foreign policy, gay marriage, etc. But then in a line of somewhat lighter questioning near the end of the debate, moderator Jake Tapper of CNN asked the candidates who they thought the woman should be that replaces Alexander Hamilton on the $10 bill.

Which leaves former Governor of Florida Jeb Bush, who responded by suggesting former British Prime Minister Margaret Thatcher ought to appear on the new $10 bill, adding “It’s probably illegal, but what the heck…”

Really Jeb? That’s the best answer you could come up with? While the topic isn’t the heavy hitting subjects that dominated most of the debate, it’s still a serious question. It’s still relevant, as someone who is running for the office of President of the United States, that donning a new American with the distinct honor of their portrait appearing on our currency might be of some importance to you.

The new $10.00 bill is a rare opportunity to celebrate an American female for the contributions she has made to our country. We’ve been a country for over 200 years and Governor Bush has had far greater access to some of America’s best talent than most people. He’s spent the night in the White House, he’s lived in a governor’s mansion, he’s sat in Congress through State of the Union speeches. And yet, the only name he can come up with is a former British Prime Minister. Really?

Coincidentally, just three days prior at the Miss America Pageant, Miss Colorado Kelley Johnson was posed the same question during the judges’ Q&A session. Her answer? Ellen DeGeneres. While the answer may seem out of left field – she’s not a political figure but rather an entertainer – she made a better case for DeGeneres than Bush did for Thatcher.

In her answers, Johnson remarked, “Not only is her entire platform speaking tolerance and equality for all, but she’s able to be funny without insulting someone and I think that is an incredible feat.”

Agree or disagree, she at the very least was able to provide a clear and poignant rationale to her answer. Jeb on the other hand? He shrugged and said “probably illegal but what the heck.” Bush’s response not only lacked any sense of coherency or preparation, but he seemed to even scoff at the question’s legitimacy.

So why this post? Why is SquarePlanet dipping into politics and Miss America Pageants? What happened to all the beef they were eating?

The fact is, the Republican Debate is really just 11 different presentations happening all at once. Miss America, although obviously of a very different nature, are 50 presentations happening at once. Every candidate is working to try and influence the hearts and minds of their audience –whether it’s the entire American Population or a panel of celebrity judges. They’re all working towards influence.

And as we’ve said many times, what matters most in a presentation is content first. Not slide design, not what you’re wearing, not how many pie charts you can pull together. Bush clearly had zero content prepared for the $10 bill question, and it showed. Because the line of questioning had stepped outside the expected realm of topics, suddenly a strong and clear message was nowhere to be found.

Bush’s answer is also a perfect example of the number one mistake people make during presentations. Selfishness. After stumbling on his answer, Bush wrapped up by saying, “A strong leader is what we need in the White House and she was a strong leader who restored the United Kingdom to greatness.”

Somehow when answering a question that has nothing to do with his candidacy, but rather his opinion as an American citizen, he can’t help but remind us that he’s running for president and that we should connect the dots that “oh okay we need a strong leader and that’s you Mr. Bush.” He’s being selfish.

Johnson, on the other hand – even when nominating just as unlikely a candidate – at least made a compelling case. There was no shrugging the question off, no turning it back to herself. She had clearly put some thought into the question and delivered an argument that was succinct, passionate and memorable.

Moral of the story – know your content and STOP BEING SELFISH.

So who would we put on the $10 bill? While the likes of Eleanor Roosevelt, Rosa Parks and Martha Washington all seem like very appropriate choices, we’d like to throw someone new in the ring, someone we believe in deeply:

Grace Hopper, although a name that may be unfamiliar to many, has impacted the modern world in profound ways. Hopper was not only one of the first and most influential female computer programmers, but rather one of the first ever computer programmers. She was a Rear Admiral in the U.S. Navy and through her work developing computing technology for the military during WWII developed COBOL, one of the most fundamental building blocks of the way we use computers today.

For years, Hopper’s reputation was that she was as feisty and driven as she was brilliant. She wasn’t afraid to challenge the status quo and inspired everyone she worked with to think differently about how a problem is solved. Her signature embodiment of this philosophy took form in a clock in her office that she custom engineered to both read and tick backwards. Meaning the clock still told the time, just not in the way everyone was used to.

When asked about why the clock was backwards, Grace Hopper would reply, “The most dangerous phrase in the English language is, ‘We’ve always done it this way.’ ”

[bctt tweet=”The most dangerous phrase in the English language is, ‘We’ve always done it this way.’ @gracemhopper”] 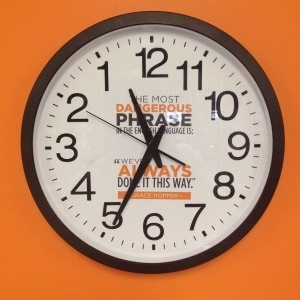 Needless to say, we couldn’t agree with her more. And to help us push our clients to think differently and break free from the norms of the expected communication strategies, we bought a backwards clock for ourselves. We couldn’t help it. So now we’re aiming to carry on her legacy through the many puzzled faces and moments of brief panic when visitors think they’re running late at first glance, only to eventually find themselves appreciating Hopper’s sentiment.

Long way of saying – why not Grace Hopper on the new $10 bill??? She’s a patriot, a true innovator and had perhaps as big of a role in the computing and digital revolution as anyone. At the very least, she’s an American.